If you have not heard about Orbi, it is not really your fault. Unlike humans, mice are self-effacing. They rarely appear on TV, boast in scientific conferences or make a nuisance of themselves during the sporting weeks. The eternal urge of humans of being obnoxious is completely absent in mice. Therefore, I can say with some certainty, even your all-knowing friends who score well in the examinations and win quiz competitions have not heard about Orbi. To be fair to them, it is not their fault either.

Well, make no mistake: Orbi is an important person to know. If you are a little interested in science or arts or crafts or sports or simply life in general, the friendship of Orbi is priceless. Now, now, don’t even say that you are too young to think about all these, because it is only a disinterested person speaking. Nobody is too young to think about sports, crafts or friendship. Arts and Science, though a little tougher, will be a breeze, with a bit of help from a friend. However, Orbi is no friend of someone who is disinterested.

Let me tell you a story.

That day he was toying with a triangle. A right angled one.

He named the arms: 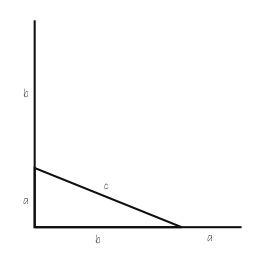 He had imagined a square. 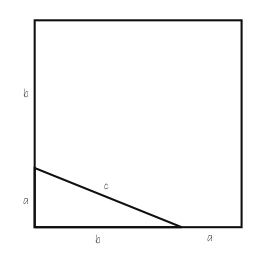 He drew the inside square.

Imagine what happened next?

Orbi started to jump with unbridled joy, two hands stretched towards the sky, while his tiny tail moving maniacally to keep his balance. Picture this: Orbi, a mouse, a good mouse, a student mouse, a mouse nonetheless, was jumping all over the house, his tail eagerly participating, and crying, “I found the square. The hidden square, with an area of c square.”

The conclusion was swift.

Since the four triangles around the inside square (c square) have an area of half a.b each (The area of a triangle is half of multiplication of the base and the height, don’t we know that already?).

He had learnt that just a few hours ago.

And he went on:

That was the day Orbi proved the Pythagoras Theorem. Without knowing. Without the help of a teacher. Without a friend. On his own.

On that very day, in his little mouse heart he sensed something that felt very light and glowing. He didn’t know where it came from and why it stayed so long in his heart after that day.